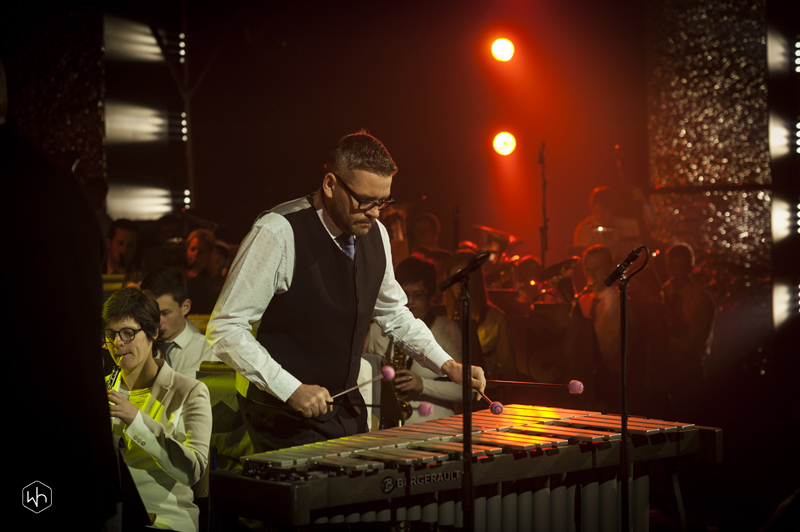 Nico Schoeters took his first percussion lessons with Eric Buyle in the 'Academy for Music and Word' in Boom, near Antwerp, after getting the hang of it through private lessons by Jozef Vervliet. Afterwards he continued his music studies at the Royal Conservatory of Antwerp, where he was taught by Leo Ouderits, Carlo Willems and Koen Wilmaers. In 1998 he graduated there with great distinction as Master in percussion.

Nico gained his first orchestra experience at the Royal Wind Band Schelle, an orchestra he still plays today. Later on he also performed with Brassband Willebroek, Festival Brassband and the “Kempisch Jeugdfanfare Orkest”. Since 2001 Nico has taken up a position as percussionist at the Belgian National Orchestra.

In 2009 he had the honour of performing the world creation of 'Marimbarpie Rapsodie' by Janpieter Biesemans as marimba soloist, accompanied by the Belgian National Orchestra, at 'De Bijloke' in Ghendt.

However, despite of all his achievements as a percussionist, Nico Schoeters didn’t take his first musical steps by playing percussion, but by playing the piano. His love for the piano has also remained a common thread in his musical career. For example, he played numerous gigs as a pianist with his jazz quartet ‘Just Friends”, consisting of a number of top musicians who are his friends.

One of his most recent accomplishments is the music project 'Cocktail maison', which he set up together with Inge Smedts, 1st soloist piccolo at the Royal Symphonic Band of the Belgian Guides. On the opening night on May 25 2017, Nico and Inge performed no less than eight world creations for vibraphone/marimba and flute/piccolo/alto flute. All pieces were especially composed for these two soloists by Piet Swerts, Jef Neve, François Glorieux, Klaas Coulembier, Etienne Houben, Jan Huylebroeck en Bart Watté. Nico himself wrote the eighth piece: Cosmopolydian is his first piece for wind band, vibraphone and flute.

Bergerault is and was a big support in the creation of this project by continuously providing Nico with fantastic instruments for his concerts and recordings.

Nico Schoeters regularly performs with all kinds of bands and ensembles, e.g. the contemporary ensemble “champs d’action”. During his career as a percussionist Nico also recorded a number of CDs and went on various concert trips abroad.

Apart from performing, Nico has also been writing music for a long time, but since 2015 he took the step of publishing his work in cooperation with Metropolis Music Publisher. So far seven pieces for piano and two pieces for wind band have been published.