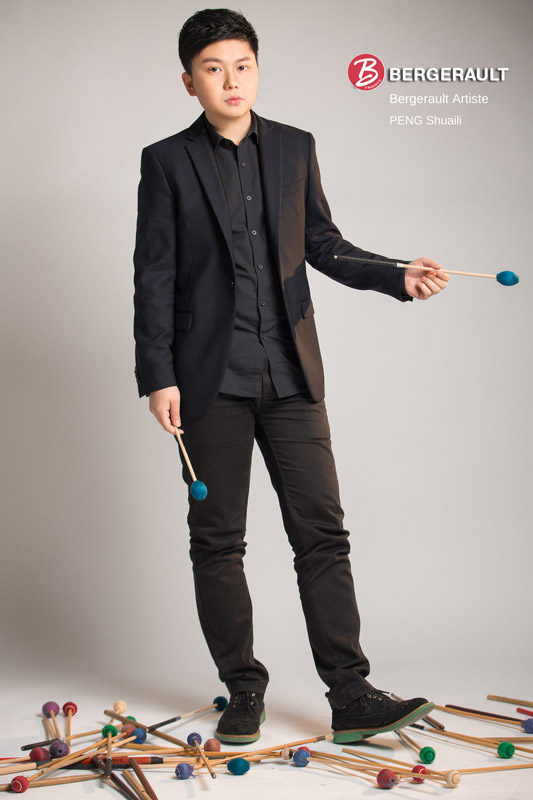 He was admitted by Joseph Haydn Konservatorium des Landes Burgenland in Eisenstadt in 2002, And study with Professor Erwin Bieber, after graduating in 2008, he continued his music career in Hochschule für Musik Franz Listz Weimar with the famed percussionist Markus Leoson. After one year， he obtained his Diploma in percussion.

In 2009, he worked with INGO Wernsdorf, as percussionist in the orchestra of Deutsches National Theater und Staats Kapelle Weimar.

During his abroad time in Germany and Austria, Peng Shuaili participated hundreds of concerts. As soloist and leadership, he worked with Austrian Youth Orchestra, German Jena Philharmonic Orchestra, German Weimar National Opera House and other orchestras, which is also achieved his Europe touring with ensembles and Symphony.

In February, 2011, he held a solo Percussion Concert in Weimar, which was praised and affirmed by the professors and the audience. In 2014, he won the position of the percussionist of

Symphony Orchestra of the Central Opera House and accompanied the orchestra to perform in many European countries.

On November 27, 2016, the Symphony series of the weekend concert of the National Grand Theatre - "Sonata, Rhapsody" percussion and Orchestra Concerto Concert played as the percussion solo. In March 2017, he led Upg percussion orchestra to perform in Xiangjiang future master Percussion Concert of Changsha concert hall.